From a Park Slope school visit

On a Solstice, Music Can Pop Up Anywhere

By THE NEW YORK TIMES 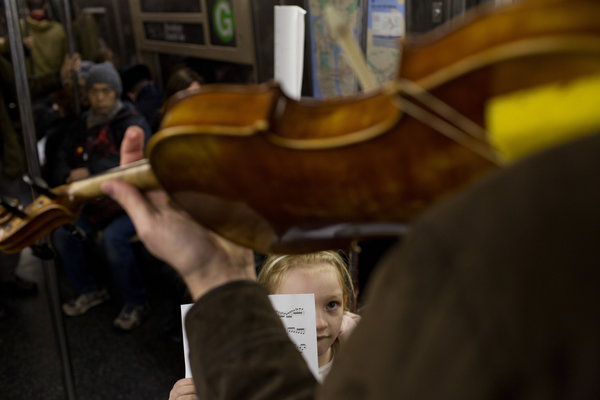 New York became an outdoor concert hall on Friday, when Make Music Winter organized events in public spaces in the city for the winter solstice. The next event? The next solstice: June 21, 2013.

Slowly, surely, it began dawning on the G train passengers on Friday afternoon. These were not ordinary subway buskers. This was no accident. Something was going on.

For an hour musicians tag-teamed from stop to stop in the first car of the train in a continuously repeating performance of thePrelude from Bach’s Cello Suite No. 1 in G.

The performance, called “Thru-Line,” started at the Court Square station in Queens heading south into Brooklyn. A musician would enter the first car and play as much of the prelude as time allowed. At the next stop the player would step off, to be replaced by someone else. The process repeated itself.

“I’m confused,” said a 15-year-old boy named Mohammed. “Why are the musicians at every stop? I’ve never seen anything like this.”

If only Mohammed had known that it was the day of Make Music Winter, the second annual winter solstice musical celebration that is an offshoot of the long-running Make Music New York event in the summer. Public events were happening around the city.

The performance in the G train was devised by the composer James Holt. No cellos were seen playing the cello suite, but it is music often transposed for other instruments. Mostly other string players took part: violinists and violists, but also several guitarists, a flutist, a harmonica and an accordion player.

Some musicians had the piece memorized. Others taped the music to a pole or door between cars or had someone hold it. Often the playing was too quiet for anyone except those nearby to hear, but the performances were usually met with a smattering of applause. Every rendition had a different tempo, and the musicians rarely reached the end of the movement before having to rush off when reaching their stops, leading to some fairly imaginative made-up endings.

Mr. Holt declared himself satisfied. “I was trying to give riders of the subway a little gift for this hour,” he said. DANIEL J. WAKI